Of course, the Rio Grande is not just grande.  It's largo (long).  Longer than grande, in fact.

The part we're in is the easternmost end, waaay down in the southernmost tip of Texas.  There's a strip of Hwy 83 running from Harlingen and Brownsville (just ashore from S. Padre Island) westward through numerous adjoining towns to Penitas (technically, a 140 mile line up to Zapata!).  Spread along that belt are some 500 RV parks and resorts, many of which bring in entertainment for their guests (known as "winter Texans").

For the last two winters, we have been both winter Texans and entertainment.  Our first winter here was sorta lean because we came without knowing The System here.

We thought it would be as it was in Florida, where we showed up with a couple of bookings and picked up more after playing those and the numerous "jams" in the area;

(Performing at the popular "Tourist Club" in Zephyrhills, Florida, a couple years ago really helped us get booked.)

...but, the way it works in the RGV is a very different deal.  Performers pay to perform at a "showcase," an event where hundreds of Activity Directors attend two days at a designated RV park's clubhouse/showroom and watch entertainers audition.  Each act gets 9 minutes.
That's right.  Nine minutes.

It's tough to show what we do in 9 minutes, but it's even tougher to make it from wherever we are to the showcase, which, by necessity, is very early in the season before.  This idea is spreading because it's so convenient for Activity Directors (not to mention lucrative for the showcase promoter--the only showcase in the RGV now costs $50 for a 9 minute "audition").

Well, last winter we did that (a mere $20 then), and garnered 17 bookings--not really enough to support us in the manner to which we would like to become accustomed, as the saying goes, but enough to warrant our being back here this season.

We'd like to share some highlights and photos of the fun and folks we've been enjoying here. 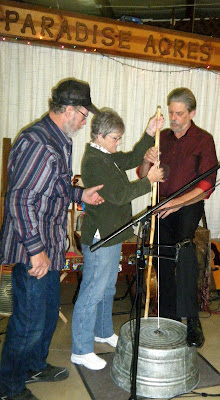 Here's a shot of a couple of audience members at--where was that again?--Oh, yeah...Paradise Acres in Alamo, mid-December.

Toward the end of our shows we've been inviting folks to come up after the show to try their hand (and foot) at the washtub bass.

This started as an offshoot of our workshop, "The Laundry Lesson," which we present at festivals to introduce those interested to the washtub bass and the rhythm washboard.

Since we started doing this, it's become quite popular, as you'll see. 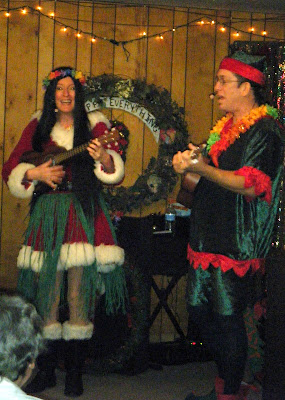 For a night out, we went to see our friends and fellow performers Larry & Melissa Beahm of One More Time presenting their Christmas show.  This is their rendition of "Meli Kalikimaka," which accounts for the grass skirt and lei over the Santa and elf costumes. And you think we're unusual! We love their show!  Check 'em out. www.omtmusic.com. 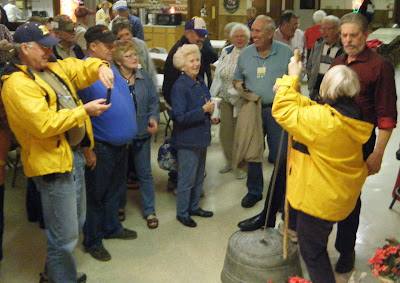 At Citrus Valley RV in McAllen, Whitt had quite a crowd interested in the tub... 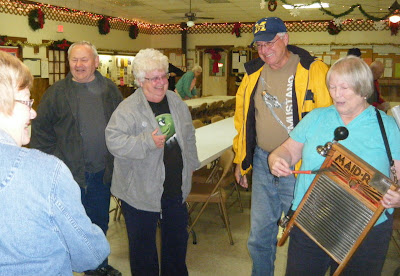 Really fun crowd that night.
Judy was a little nervous she was gonna be replaced by an enthusiastic audience member, who graciously backed down when she learned carrying heavy equipment was part of the gig!