We get to be the audience!

In addition to the many amenities we enjoyed during our stay at Treasure Lake Resort, Becky, our boss for this gig, turned us on to some show tickets.  For once we wouldn't be leaving an interesting area without having seen some attractions;  we had the time, for a change, and now we had complimentary tickets!

Now, sometimes, free tickets turn out to be worth every penny; but, this time we were in for some really pleasant surprises.

First, we saw a new show produced by The Hughes Brothers called "It."  Five brothers started together 17 years ago and now their show includes 45 family members performing in what can only be called an extravaganza.  It was spectacular, of course, as a big Branson show must be, and it was thoroughly entertaining, packed with great music, dance, & comedy.

We tried to get a shot with something on the big video sign out front.  Lots of area theaters have these spectacular displays; but, they move, ya see, making it tough to catch an image. Should have tried video and then captured a frame.  Oh, well.

Every member of this huge (I know, it's "Hughes") family performed flawlessly, right down to the cutest toddlers ever. The teen numbers were even good--well-done medleys of contemporary stuff presented with imagination and performed with skill & energy.  Through a constant flow of costume changes, complex blocking, & tightly timed interactions, everything was smoothly coordinated--not one missed cue, not one fidgety kid.  Made us wonder how things were organized backstage.  Must have been something to see in itself!

The first half of the show was a mix of contemporary music favorites & oldies, and the second half an ambitious menu of hits from musicals, all in costume, of course.

There was a very skilled combo onstage for most of the show, in the background of a staging scheme that was cleverly flexible.  These musicians were sometimes joined by family members for solos, and sometimes yielded the stage entirely so some family member's instrumental virtuosity could be showcased--and there was plenty to enjoy, especially from the teens, who drummed, fiddled, and played guitar with flair & poise.

There's a hand-jive type routine in this show that involves a looong bench with a couple dozen (I think) family members, arranged by height & wearing boaters, that is delightfully quick, complicated, rhythmic, and tight as can be!

Like most showrooms nowadays, the stage was flanked by big projection screens and effects smoke was employed to show up the lighting effects.  The "legs" were panels with translucent squares that could be lit with different colors, used really well to complete the set's look for a scene.

Of course, there was ample opportunity for singing along and some cute interaction bits.  All told, we had a great time, and other than the usual harmfully pounding bass at times, we really enjoyed seeing a production that was professional in all its aspects.

And, what a family!  Mom & Dad (Grandpa & Grandma) even ran concessions!

We'll share about the other show we saw in the next installment. 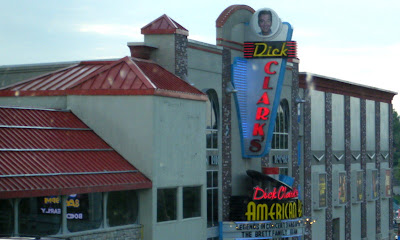 We arrived in (cue reverb) Branson just before the start of "the season," the very weekend some of the shows were opening for the first time since Christmas or the previous Fall; so, traffic was not bad.

We had heard, as did everyone within reach of media, of the tornado that hopped down Branson's "Strip," Highway 76.  Like any tornado, this one seemed to pick and choose ts targets, wrecking some places and sparing others. 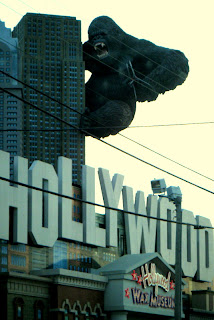 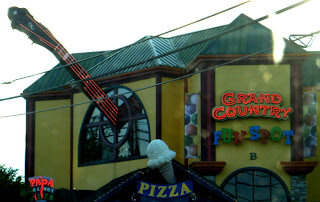 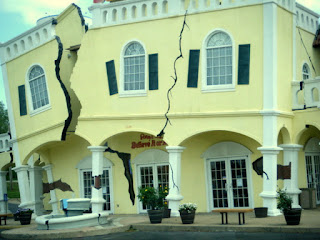 ..and actually built to look this way!

Even local landmark, The Blue Bayou Motel, took a hit....


But, it's still Branson, operating full tilt, no delays, new shows popping everywhere, and a whole community focused on offering a quality service environment everywhere.  What a concept!

Next episode, we'll share a little bit about the entertainment we enjoyed there!
at 1:48 PM 2 Comments!