Our Story (and we're stuck with it!) 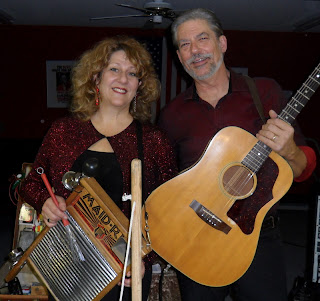 The Washtub Two are actually the remnant of The McKinney Family Washtub Band, the homeschool music project begun very late in the 20th century in the north woods of Michigan by a father simply trying to pass on to his daughters the tradition of handmade, homemade music & laughter.

The McKinney part goes back to Judy marrying Whitt back in ’80. (That’s 19-80.) Since that’s his last name, she thought it convenient to just use the one for both of them.

The Washtub entered their lives in 1988, when Whitt and his 18-year old son saw one played like a "real instrument” by buskers at a street fair in Tucson. They built one, and used it in their duo, busking across the country and playing ”open mics” at comedy clubs, bars, and coffeehouses. (You may have seen them the couple of years they were invited to busk at the Columbus Arts Festival.) A decade later, it would resurface as part of a homeschooling project for Whitt and Judy’s daughters’ ongoing music class. “The McKinney Family Washtub Band,”where Judy learned the instrument. (That project’s “Final” was a tour of paid performances in the Southwest.)
The Two of them, Whitt and Judy, have performed together for about 15 years, (touring full-time for five recent ones) to increasingly enthusiastic response.

Whitt plays guitar and does most of the arranging. He writes a lot of the songs they sing, and specializes in “updating” the best songs of others to produce parodies or “additional verses” which, if heard by the original composers, will hopefully produce a good-natured response, and not litigation.

Whitt became involved in an incredible coffee house scene in Tucson from about 1959 to 1969, and met the likes of Bud & Travis, The Blue Ridge Mountain Boys, Barbara Dane, and Josh White Jr.   His encounters and gigs over the years with Bud & Travis, The Smothers Brothers, The Limeliters, and The Kingston Trio, have taught him many aspects of music and performance, as well as stage lighting and sound, which he has designed and operated (mixed live) for most of them, as well as The Count Basie Orchestra, Marilyn Maye, Ray Bolger, and many other Dropped Names.
(Whitt still does lights and sound consultation as well as a performance enhancement service.See "Booking" page.)

For a couple of years in the late 60s he wrote and produced for the hottest folk and comedy duo Atlanta, Ga. ever saw, “Pat & Barbara.” (Pat passed away in August of 2004. Pat was also a member of The New Kingston Trio in the early 70's.)

The late 70s found Whitt working, as he had many times over the years, in radio, which is where he met Judy.

In 1982 Bob Burns, a radio broadcaster in El Paso, ran a contest to open for old friends The Kingston Trio, and, with his (and, mostly Judy’s) encouragement, Whitt was lured onstage, and began to perform as a “single”.

He has entertained over 2500 troops waiting to "deploy" for the Persian Gulf War, played to delighted audiences at Dick Cerri's showcases for the World Folk Music Assn. in Washington, D.C., and performed on the main stage, just before Riders In The Sky, at the Border Folk Festival in El Paso, TX., and twice on the main stage at the Tucson Folk Festival, the first time being introduced by his old friend & mentor, the late Travis Edmonson.

Judy comes from a background in theatrical arts with a lifelong love of comedy; nonetheless, she stays with Whitt in the hope of helping him develop a sense of humor. In Tucson she hosted a big band radio show for a while that was hugely popular, and did voice work, both serious and comedic, on dozens of commercials. When she and Whitt operated a radio station in Bisbee, AZ, she did everything from DJ shifts to live newscasts, and, of course, more commercials.

Heroically patient (and possibly enabling), she adds clear, honest vocals complimented by a washtub bass that confounds so-called “real” bassists, who have to rely on four strings to get the job done. She also plays flute, mandolin, banjo uke, bodhran, harmonica, ukulele, jawharp, and washboard. All of which she learned in her late 40's. (Proving it's never too late to pursue something you love!)

In addition to gamely mastering whatever bizarre object her husband insists is an instrument, she contributes to most of their original songs, and helps write their trademark “introductions.”

The Washtub Two deliver carefully-crafted, thought-provoking material in the finest, truest sense of Americana—songs that bite and tickle, that challenge and inspire—couched in a captivating style of storytelling that pokes pomposity and fingers foibles. Their growing following attests to the contagiousness of their energy and insight.

As one fan put it, “The closer you listen, the more fun you’ll have!”

New comments are not allowed.