Finally recovered from our amazing, exhausting summer tour, lets take a look back...

(That's supposed to be a little joke.  There was very little tour, with lots of summer left flopping all around it--three days out once, then four more later.)

The "amazing" part was how uneventful it was--no mechanical problems, no accidents or close calls, no getting lost, no injuries or illness to mar the few gigs.  Still, it was kind of taxing.  If we had enough duplicate stuff that we could leave the traveling rig all set up, it would greatly reduce the effort required to shift from onshore life to road living and back; but, we don't, which makes for lots of hunting, shuffling, and resituating every time and inevitably results in something being forgotten.

The logistics of chasing gigs around the country combine with the loss of funds out the tailpipe to make touring a challenge even for young folks, which we are, sadly, not.  We've been rethinking this for three years, now, and may have come to some conclusions.

Folks seem to be curious about what we call "retirement gigs,"  so-called by us because they're so lucrative, we'll soon be able to retire.  (Oh, my sides!  I crack me up!  Also not true.)

This is an interesting little market we were turned onto several years ago by old friends and show biz veterans, Larry & Melissa Beahm, aka "One More Time."  These two are very professional musicians and performers who have worked cruise ships, long one of the most coveted gigs, and also managed an independent/assisted living facility for one of the largest companies in that industry.

Turns out, many such facilities have an entertainment budget, and welcome the opportunity to present their residents quality entertainment.  It's not a lot of money, but it's easy to do, logistically, the hours are never late or long, and, if you work as hard as OMT does, you can practically do a gig a day.

Now, before you get all judgmental wondering why we don't just volunteer to help those poor old folks in the "home," consider a couple things.  We have often volunteered to bless folks at actual "rest homes" that are not part of a national successful chain of commercial facilities.  The places we're getting paid by are not populated by poor people.  At least, they weren't before they made the substantial commitment to live in comfort, which they do.  These places are like luxury hotels with a substantial amount of very personal service, and there are aspiring and amateur performers who play there for free, or for very little, and worth every penny.

Here we are preparing to play in the dining room of one such place.  Not a shabby environment, eh? 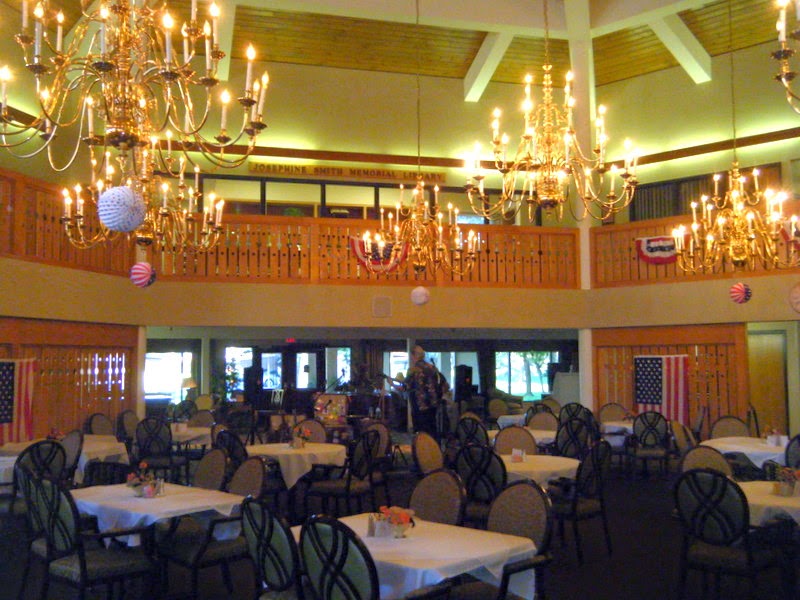 Sometimes, we have to set up outside, and sometimes the preparations are made without considering everything.  This is an example.  The time of day put the declining sun right in the audience's eyes, and, of course, on our instruments as well.

Then, there was the Jesus problem. 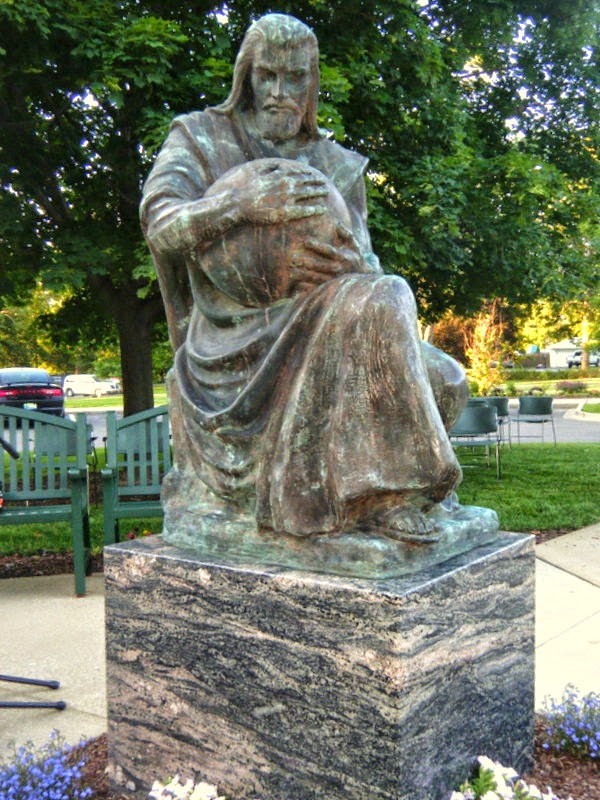 Of course,
"He's got the whole world in His hands," so  it wouldn't be sane to say He was in the way when He actually
is The Way!


None the less, this was the view from behind the mic... 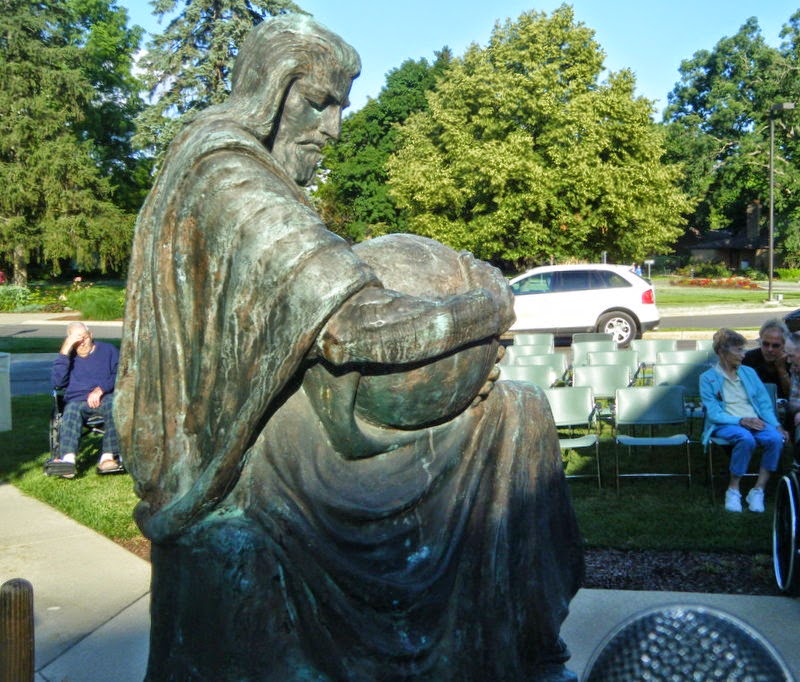 But the folks adjusted their seating, and, as the sun mercifully sank behind the building, we sweated through the show together, and all had a great time.

Ya gotta be flexible.  (Seriously, the statue is quite a piece of art, is it not?)
The Lord is welcome to upstage us anytime.

One of the biggest reasons we started touring years ago was that we saw it as a way to pay for visits we wanted to make around the country to friends and family.  This summer, we were booked in Toledo, which gave us the opportunity to see our buddy, Herb Stokes (III), a chef and music and comedy lover with eclectic tastes. 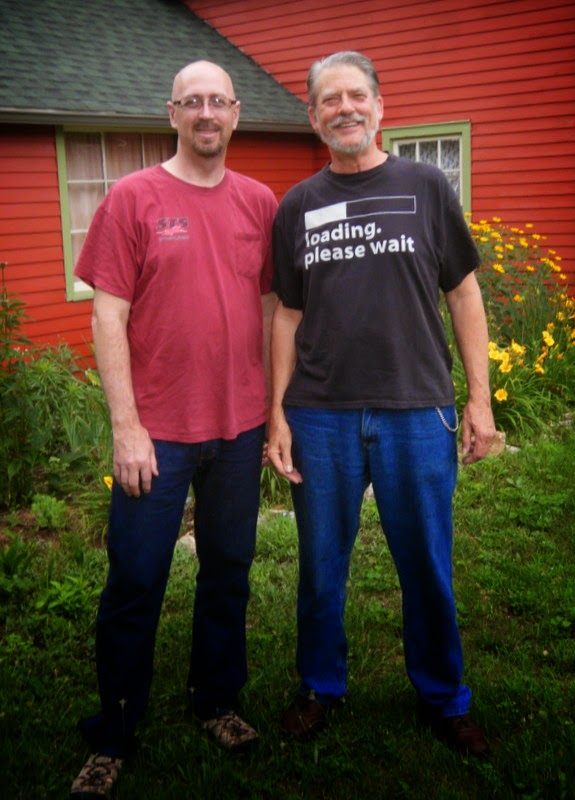 Here Herb poses with an itinerant minstrel in front of the historical home he occupies as caretaker.  This was the home of Ina D. Ogdon, who wrote
"Brighten The Corner Where You Are."


Herb has done a lot of work restoring the place and
improving the grounds, which makes it a lovely place
for gypsies to camp. 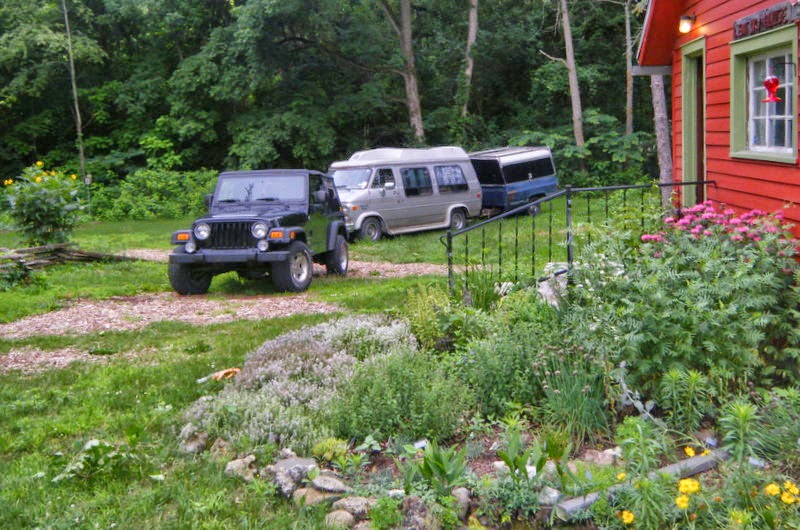 Other than a visit to the Toledo Zoo, that was pretty much "it".