More fun than grownups should be allowed to have!

It's no secret that we're trying to break into the Arizona market.
We both grew up there, sorta, and, after three winters in FL and two in the Rio Grande Valley of TX, we've been wending our way westward for the past couple months.

We should have mentioned, before our Deming report in the last episode, visiting our friends Bob & Melody Burns in Las Cruces, NM.

Bob has retired, for health reasons; but, he was a true mover and shaker in the music scene around El Paso & Las Cruces for several decades, as well as a veteran broadcaster, and a touring artist, along with his lovely wife, Melody, for several years recently.  His jazz programming, participation in and support of big band music, and reputation as a folk artist earned him many awards and accolades.

His greatest achievement, though, in our eyes, was luring Whitt onstage and into performing back in '83.  So, when you're watching our show and wonder "Who ever told this guy he could pass himself off as a performer?"--well--Bob's to blame.
We enjoyed our visit, and the Burns' hospitality, as much as ever, and really can't wait for the next opportunity to see them again and swap more "war stories."

Meanwhile, after our two little gigs in Deming, we sallied on to the enthralling metropolis of Benson, AZ, to the Escapees Saguaro Co-op RV Resort, where we shared a whole concert (something we haven't been able to do for a while) with some really sharp, fun folks there.

We think they had almost as much fun as we did!

The lady perched on the platform in the back (Ingrid) gave us a video of the show, and, even though there were problems with the audio feed for the second half, we managed to edit together a little telescoped demo for our RV page.  We really appreciate that.  (If you'd like to see a little taste of what we do now, CLICK HERE.)  It's 15 minutes of highlights only.  We'll be uploading some full songs soon to our YouTube channel we're working on.

Now we're beating the bushes around Southern AZ, having had our usual late start booking, so we don't have a lot of gigs yet; but, the ones we've had have gone very well, and we're getting to visit old friends in the Old Pueblo (Tucson, for you turistas).

Just the other evening, we enjoyed seeing three old friends perform at the
Tucson Songwriter's Showcase at The Monterrey Court.

Ron Pandy hosts the event,
and shared some excellent examples of his craft.
We especially enjoyed his "Cold Day In Hell." and his "Coffee Song,"--the first one powerful and poignant, and the last clever and catchy.
He played a guitar owned by the late Stephan George, and shared a soulful and thought-provoking tribute his memory and their friendship. 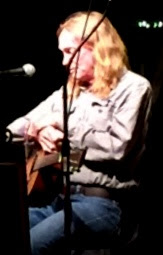 We also got to hear Al Perry (remember his wild band, The Cattle?), who shared a collection of his hilarious songs of heartbreak and rejection.  Really.
We laughed at his pain,
as did everyone else present.

(Sorry about the mic stand across your face, Al!
Our photographer was trying not to get between you and the audience.) 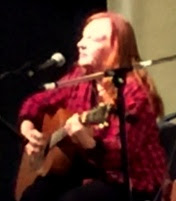 Perhaps the highlight of the evening, for us, was getting to see Linda Lou Reed's solo performances of some of her sincere and touching originals.
She's Vice President of the Tucson Kitchen Musicians Association (TKMA), the folks who produce the annual Tucson Folk Festival.
She was pickin' and singin' real purty!
She was also playing a guitar formerly owned by Stephan George, which made us wonder,
"How did we miss the estate sale?"
We're going to try and catch her with her group, The Desert Drifters,
at the Oro Valley Marketplace on the 28th  of this month.

We had a couple of two-day forays into Phoenix.

The four gigs went fine, but sheesh, the traffic!
We're actually not looking forward to going back.

(Is it even possible to look forward to going back? We'll see.)

So, it you're in the area of the actual Southwest, we hope to see ya out there!
at 6:48 PM