Our great U.P. whirlwind tour was a blast!


For you undergraduates, "U.P." is Michigan shorthand for "Upper
Peninsula" (or Eastern Wisconsin, depending on which time zones you
live or work in).  Just a short drive over the Mighty
Mackinac Bridge (um, across the bridge) enables you to drink in the spectacular Lake Huron-becoming-Lake Michigan view...Okay, too big to drink in.  Just take it in.


We headed up to the Soo ( "Sault Sainte Marie" Are you taking
notes?) and were greeted by the smiling face of Simon Couvier, the
stage manager for the Sault Sainte Marie Summer Arts
Festival.  After some generous hospitality and a couple of
stints on the stage (sound eptly engineered by Taylor Brugman) we spent
the evening and morning in the company of Jean and Chuck Jones.
(Jean is a cornerstone of the festival, she's chairman of The
Sault Summer Arts Festival) 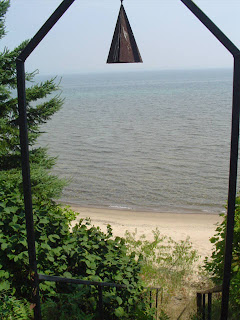 Between Jean's home cookin', the view of Lake Superior from their flower-filled deck, and the
great conversation and camaraderie, we were slightly less than willing
to hit the road for Kingsford. 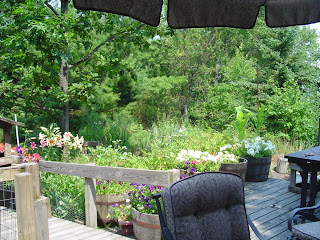 We flogged ourselves to the van and headed for the Wisconsin border,
stopping just short of it in the twin towns of Iron Mountain and
Kingsford.

We enjoyed the comfortable, spacious showroom Liz Wheeler has set up in her Koinonia Cafe.
We had gourmet food, wonderful coffee, a really fun audience (many of whom were from Wisconsin) and the evening was over too soon. 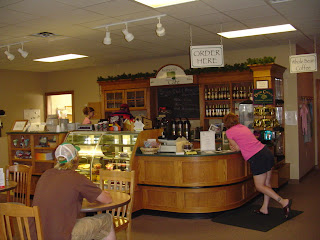 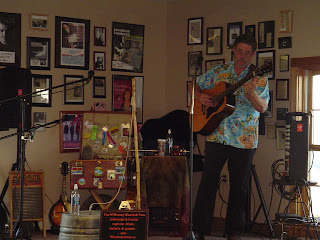 Liz opened her home to us, and after a completely comfy night's rest, the open road gently growled our names.


With the exception of a brief game of "chicken" with a truck in a
one-lane construction zone, the short hop to Escanaba and The 8th
Street Coffeehouse was uneventful.


Some remodeling has greatly improved 8th
Street's showroom, and Judy was only slightly distracted
during our performance reading the many tiles on the ceiling that
have been signed by past artists...

...names like Jack Williams, Claudia Schmidt, Hoolie, and, well...others! Next time you're there, look for ours!


Our bookings behind us, we returned to The Soo.  Chuck and Jean
had sweetly extended further hospitality so we might have the pleasure
of attending one of the opening performances in the (partly) renovated
Soo Theatre. 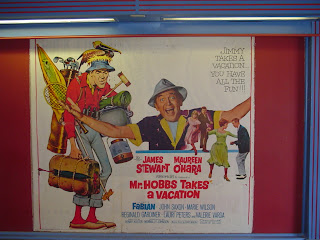 Again, we had such a good time there, the after-brunch fun and conversation nearly made us late!


The program began with a  locally-written, produced, and
performed play highlighting the Soo Locks' history (it's the Locks' 150th Anniversary.)

Then, after an intermission, they presented an amazing array of variety acts--dancers,
Gregorian Jazz, Michigan songs of the voyageurs, a composite chorus of community groups, excerpts from a nearbyproduction of "My Fair Lady,"--there's a lot of talent up there!
After three hours, our bottoms were numb with delight!

Seriously, it's great to see the progress made by a determined and
dedicated crew of volunteers, and even better to witness the tremendous
community support and response.
Way to go, Sault Ste. Marie!!


Now we're back "down below" trying to remember we are really "trolls" (people who live under the bridge), and trying to come up with some valid excuses for another trip U.P. north...the list is growing!
at 7:32 PM