...John's curbside sign at North Woods Fine Art Gallery & Coffee House...
This gets our "Best use of possible space" award for sure; but, it also gets the "What was so hard about that?" award for being the only promoter or medium to get our name right consistently!

Beautiful sign, John! Thanks for the time and effort!

The latest addition to the Mckinney family name walk of fame is "The Mickinney Washtub Two".  So, we're part Irish...no need to call names!

But wait! That's not all! There's "Washtub Duo" and even "The McKinney Washtub Trio"! Yup. No joke. They even gave us top billing! (We're thinking of changing our name to "The Mickinly Washboard Duo Band" to see if that doesn't result in their actually getting it right.)

Here it is 2008 and the new year began with getting introduced as "The McKinney Washtub plus Two"! (So now our washtub is actually getting its own billing!)

The Tampa Tribune (bless it's heart) wrote us up in an article with the headline,
"Washtub, Comedy, Two" for which we are entirely grateful!

But wait, there's more! "The Washboard Band", "Washtub II", and "The McKenny's Washtub Two". (Apparently we are owned by some big corporation or something.)

(We are NOT making any of this up!)

And, completely off the wall, we were called "The ubiquitous Steve & Holly" by someone at the Moon Shadow in Tucker, Georgia.

The fall of 2008, we recently appeared on lobby billboards as follows:
"McKinney Duo," and "The Washtub," (So now we're just opening for the washtub!)  also "Husband & Wife McKinney Duo."

"The McKiddeys" ( has a certain ring to it, actually), "McKinney Washtub" (suppose we could just take the evening off), and the not very inventive, "McKinney Washtub Duo"  always a popular mutation.  At least all the elements are there except the "The" (and what's so hard about the "The"? Can you spare us a "The" please?)

"The McKinney + Washtub Two"...technically true as Whitt's the only blood McKinney in the group...

July 2009, and we couldn't wait to include this new one which appeared on the billboard in the lobby:
"Olde Tyme Washboard Dance with The Olde Tyme Washboard Band." We kid you not. Actually, we'll give 'em a few points for the "Old Tyme" just for creativity, but we're subtracting them due to the excessive use of the "e" ending.  And, no one danced.

Dec 2009. Our latest permutation was printed in a full-color glossy monthly newsletter, where we were billed as "Washtub Band with Whitt & Judy" (always happy to be included) and we also got another mention on the back page as "McKinney Washtub Band." Still a mystery to us why the country seems to be suffering a dearth of "The"s.

March of 2010. There have been a lot of duplicates we won't bore you with.  The only two new ones we have to add in three months of touring (c'mon Activity Directors where's your muse?!) are "Washtub Duet", which we'll leave you to make up your own subtitle for, and the simple yet elegant "Washtub Trio", a variation on a familiar theme.

April blows in"The McKenny's", and "McKinneys-The Washtub, " &; "Washtub-2", not to be outdone by "Judy McKinney and the Washboard."  (The money Judy makes taking in laundry more than makes up for--oh, never mind.)

October of 2010 brings us "McKenny Washtub Twosome" and "The Washtub II Band." (Did we mention we are not making this up?)

We ended 2010 with some doozies:
"The Tub Act",  which may be an unnatural act, "The McKinney's"(we own them you know) "Wash Tub Two", and, of course, with a slight variation on a popular theme, "WashBoard Duo"

Then they scribed "Was Tub Music" (Vas is das?) This was written in beautiful neon letters on a backlit black sign.  "The Washtubbor" made it seem Judy works alone & only plays the washtub--not only extra pressure for Judy, but probably rather boring during the second hour!

And finally, "The Mickiney Washtub Two".

2011 has produced many, many repeats of the old standards, but there have been a couple of innovative monikers, including this relatively new genre... 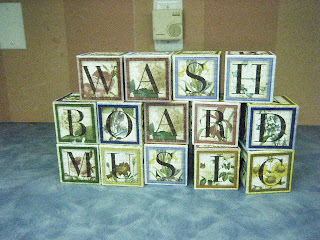 In February, we were introduced as, "The McKinney Family Washtub Two", which is technically true, and pretty close, but no cigar folks!  That was followed by "Judy McKinney and the MDR Washboard Band." (Don't ask us! Maybe "Minimum Daily Requirement"?  But the thought of a whole band of washboards is daunting, to say the least.)
Then there was the simple "The McKinney Washtub"--accept no substitutes!  (Hey, they spared us a "The"!)

October of 2011, and the mangling continues:
"The McKinny Washtub" is an ongoing theme, often without an "e", "The Washtub duo," " The McKinny Washtub Band," "The Washboard Band", which sounds noisy, to say the least, and finally but not least, "Entertainment by Judy McKinney The Washtub." Okay, Judy is not happy with
this one at all! Sheesh, gain a few pounds and the name-calling starts!

2012, in the Rio Grande Valley, we  hit a new level.  We were listed in the paper, and at the performance (they were consistent anyway) as simply "McKinney".  What can we say?
And, what can compare to the thrill of seeing our name in dry-erase marker? 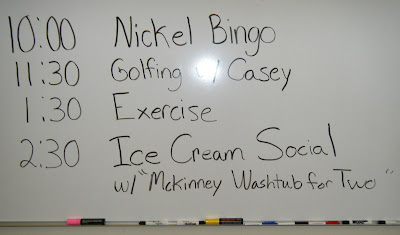