January 9th, 3:00am, Corpus Christi, Texas, boondocking in a Walmart parking lot, we wake with our van home rocking in a stiff wind.  We sit up.  The hail starts.  The wind gets much worse. Then there's a huge crash and Whitt feels water coming in the window on Judy's side of the bed.

"Are you sure you shut this window?" he shouts above the freight train roar.

"Yes!" Judy answers, and they raise the window shade to discover--no window!

Then they realize rain is coming in in the "dining & bathroom area" window, too.  They pull out all the plastic they can find without leaving the van and start shoving it wherever they think it might stop some of the intruding precipitation.   When the rain subsides considerably, Whitt gets out to see exactly what has happened.

A couple of hundred yards from where we're parked, Whitt sees this Walmart truck.  Doesn't seem right.  Do tired truckers usually lay their van down when retiring for the night?

This truck's driver had to be removed through the sunroof with two broken shoulders! 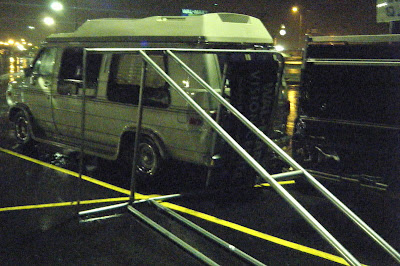 What you're looking at is a Walmart cart corral.  Did you know they're not fastened down?  Neither did we.  The Walmart sign attached to it (like when you're putting your cart away, you might not know where you are) turns the whole thing into a pipe-framed box kite in a 70 mph breeze.  Handy!
Needless to say, there was quite a hubbub--rescue truck for the trucker, employees out surveying the damage to their car windows, and, of course, the ubiquitous Walmart security truck circling constantly, amber lights flashing.  Not once did the security guy stop to check on us.  If we had not sat up minutes before the impact of the cart corral, we would have been lying in bed, peppered with glass, at the very least.   Still, no one ever even inquired.

We went inside and spoke to the manager, who explained he was very busy and could speak with us "in the morning."

Whitt went to the hardware department for plastic and tape, which we purchased.  We stuck plastic up temporarily on the outside, using the heavy magnets that usually hold our mosquito screening in place.

At sun-up, we felt the van rocking again, and heard sounds of metal creaking.  Whitt got out to find four Walmart maintenance guys trying to remove the cart coral from its lodging place between our rear bumper and chassis.  The fella in charge looked at Whitt, shrugged, and tugged on the pipe frame again to indicate that they were unable to remove it.  Whitt suggested that three of them lift it and move it slightly to the left, and it immediately dislodged, whereupon the four of them lugged it away.  All the other corrals in the lot were simply flattened on the asphalt, signless.

Figuring this might qualify as "the morning," we dressed and went in to speak to the manager.  He said there was an insurance claim form we could fill out, which we did.  We were given an number to call regarding our claim.

We then went to work, and, after a whole day of vacuuming glass, cleaning out the frames, taping both sides of the remaining shattered glass, getting masonite cut at Home Depot, taping plastic, and even sweeping up the glass in the parking lot, the van looked like this:

A couple days later, we called and someone answered "Claims Management Incorporated."  We were never even told the name of the insurance company, if, in fact, one was ever even involved.  We were issued a "claim number," and the name of our "claim representative," Matt Harris, and his extension number.  We called that number and left messages for over a week, and then called the main number again to complain.  Whitt was interrupted mid-complaint and given the name of Matt's "supervisor," David Morton (or maybe Horton?) and his extension number.  He ignored us for a month.  And that's how Claims Management Inc. manages claims.  Pretty cost effective!

Turns out these windows are hard to find, now, and the one source a shop located for us wanted almost $500 per window just for the glass.  We'll see if we're able to get that much "ahead."

Meanwhile, we're going to be working on the song. We'll put it on YouTube when it's ready.